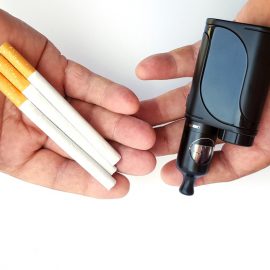 With a recent spate of disturbing cases involving vaping, many are asking the question – is vaping more dangerous than smoking cigarettes? Patients have been admitted with acute lung trauma across the country. The Center for Disease Control (CDC) is dubbing the phenomenon ‘vaping-related lung injury’. As of October 1, 2019, there have been 1080 cases reported in the US. 48 out of the 50 states have reported a case. Of that group, fifteen people have died. The youngest of them was seventeen years old.

“Patients have been admitted with acute lung trauma across the country.”

There is a lot of confusion around what is causing these injuries and the investigation is ongoing. After years of being touted as safer than smoking, vaping has suddenly been brought under the spotlight. Despite the declining rate of smoking among young people, vape usage has skyrocketed in recent years. For many addicts, vaping offered an alternative to smoking, which often goes hand in hand with other addictions. Now, it seems, it may pose a new danger to addicts in recovery that are also aiming to quit smoking. So, is vaping more dangerous than smoking cigarettes? Let’s find out.

THE HISTORY OF VAPING AND E-CIGARETTES

The history of e-cigarettes goes back much further than you might expect. Philip Morris Tobacco worked on an early e-cigarette design throughout the 1990’s. However, the modern vapes that have become so ubiquitous officially made it to the US markets around 2007. Many e-cigarette users have been using the products for that long, and many of the patients suffering from vaping-related lung injury have only been using the products for a few years.

“83% of the victims report having used cannabis oil vaporizers at least once.”

The CDC has not confirmed any findings of consistencies between the cases or offered any explanation as to why the symptoms are so acute. With the cases spread across the country, accurately tracking down the common denominator is a nightmare for public health services.

However, health officials have identified some commonalities. 83% of the victims report having used cannabis oil vaporizers at least once. However, at this stage, it is impossible to say what the cause is and speculation is irresponsible.

What is happening to victims is more akin to an injury or a chemical burn in some cases. This is why the CDC is now calling it an injury. It also affects victims very rapidly and is largely contained to the United States, with only one vaping-related injury case reported outside the US so far in Canada.

These facts appear to point to the issue being related to a specific contaminant or piece of equipment, rather than long-term health impacts from vaping generally. The question remains though, with this new risk, is vaping more dangerous than smoking?

This is a particularly important question for the recovery community. Despite declining cigarette smoking rates in the general population, among addicts, Cigarette smoking rates are surprisingly stable. Many addicts and treatment programs see smoking as a lesser evil. A socially acceptable way to hold on to the comfort of addiction without affecting your behavior. However, continuing to smoke increases your risk of relapse and growing numbers of addicts are turning to vaping to kick their cigarette habit”.

“Many addicts and treatment programs see smoking as a lesser evil.”

The CDC has issued a warning in America to avoid vape products until the source of the problem has been identified. For addicts that are using vaping as a way to wean themselves off cigarettes, this poses a problem. The short-term dangers of vaping-related lung injury are certainly serious. However, the long term health risks of smoking seem to be much greater.

LET’S LOOK AT THE NUMBERS

The CDC’s warning is absolutely necessary. Until the cause of these injuries is identified, vaping has to be considered a much more immediate risk than smoking. However, some worry that this warning will push smokers back to cigarettes. In the UK and other parts of the world, health officials still maintain the position that vaping is a better alternative than smoking. Is vaping more dangerous than smoking cigarettes, or should smokers stick to vaping rather than returning to normal smoking?

“In the UK and other parts of the world, health officials still maintain the position that vaping is a better alternative than smoking.”

While vaping-related lung injury is undoubtedly a serious issue, it is important to understand the broader context when comparing vaping and smoking. Aside from the recent injuries and deaths, most data around vaping points to it having lower risks of long-term health impacts than cigarettes. However, vaping is a much more recent phenomenon and it is impossible to know the long term impacts of e-cigarette use. With that in mind, let’s look at the numbers.

It is not really useful to compare the long term health effects of smoking and vaping at this stage, given the lack of data. However, the infographic above clearly shows that cigarettes are extremely detrimental to your health. It also shows that the vaping-related lung injury phenomenon is very recent and incredibly acute. What is perhaps most concerning is the fact that teens who have never smoked are taking up vaping, putting themselves at risk unnecessarily.

Is vaping more dangerous than smoking cigarettes? Should you go back to cigarettes if you can’t face quitting entirely? Well, firstly, we absolutely do not suggest that anyone ignore the CDC’s warning about vaping. The danger of serious lung damage from vaping-related lung injury is severe. If you have never smoked, or do not currently vape, then you should definitely not continue to vape or take up vaping now. Until investigators identify exactly what is causing these cases, all vaping should be considered potentially dangerous.

However, if you are in recovery and feel that returning to smoking may be detrimental to your recovery, then obviously you should not put your recovery from cigarettes or other substances at risk. Ultimately, even if vaping is less dangerous in the long term, it still has negative health impacts though. We would suggest using this time to find alternatives and begin working towards quitting smoking or vaping entirely. Nicotine patches and gum can keep away the cravings, and there are lots of ways to replace the physical habit of smoking.

Over the past decade, vaping has offered smokers around the world a seemingly healthier alternative. It continues to be viewed that way in most other countries. Until more data can be collected, we can’t know if it is truly safer, but it appears to be. However, with the threat of vaping-related lung injury, vaping is not worth the risk.

Going back to cigarettes should not be an option though. So, is vaping more dangerous than smoking? At this point, we can’t say for sure one way or the other. What we can say, is maybe this is the perfect opportunity to kick the habit once and for all.

At Gratitude Lodge in Orange County, our dedicated team of specialists and Master’s clinicians create an individualized treatment approach to get you back on your feet from the devastating consequences of addiction. Learn more about our programs at Gratitude Lodge.