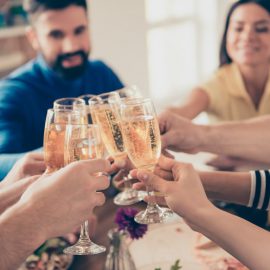 Although alcohol is completely legal and widely accepted socially, it is still a dangerous, addictive substance. It’s important to be able to recognize some of the early signs of alcoholism. Approximately 88,000 people die annually due to alcohol-related causes, making it the third-leading cause of preventable death in the United States. Most of these people suffered at some point from Alcohol Use Disorder (AUD).

Despite this fact, alcohol use remains an integral part of the social lives of most Americans. 140.6 million Americans aged 12 and over drank within the past month in 2017. This can make recognizing alcoholism very difficult, both in yourself or a loved one.

The line between being a regular drinker and having a problem with alcohol can seem blurry.

For many people, heavy drinking or binge drinking is seen as a normal part of their culture and social lives. The line between being a regular drinker and having a problem with alcohol can seem blurry. Often, those who feel they may have a problem, or that a friend or family member may have a problem, are told not to worry by those around them. Unfortunately, if you ignore the early signs of AUD, it can quickly become a more serious problem that severely impacts your life and health. So, what are the early signs of alcoholism?

Early signs of alcoholism and functional signs alcoholism can easily go undetected by friends and family, sometimes for years. Not all alcoholics lose control of their lives, and many become very adept at hiding their drinking from those around them. However, alcohol abuse will eventually lead to health problems and will affect the lives of addicts in more significant ways. By identifying the early signs of alcoholism, you can recognize problematic drinking in yourself or a loved one before it becomes a more serious issue.

1. NOT BEING ABLE TO STOP ONCE YOU START.

One of the clearest early signs of alcoholism is not being able to stop once you start drinking. Addiction is all about loss of control. People who do not have a problem with alcohol can enjoy a drink or two without it turning into a binge drinking situation. If you or a loved one regularly find that you finish an entire bottle of wine, or drink all of the alcohol in the house before stopping, then you may have a problem.

Most addictive substances work by triggering the release of dopamine in the brain. Over time, the brain develops a tolerance, meaning that less and less dopamine is released. This means that addicts need to use more of the substance to get the same effect. This is exactly the same for alcohol. If you find yourself drinking the same amounts without getting drunk, or drinking more than everyone around you to reach the same level of intoxication, then you should definitely examine your drinking.

3. BAD MOOD WHEN NOT DRINKING.

Another part of the process of addiction is drug detox and withdrawal. Once the brain is dependent on a substance, going without it can cause feelings of anxiety, depression, and discomfort. Serious symptoms of withdrawal are associated with serious cases of AUD, but there are some early signs that you may be experiencing withdrawal. If you or a loved one experience mood swings or irritability when not drinking, that is a sign of a problematic relationship with alcohol.

4. HIDING DRINKING FROM FAMILY OR FRIENDS.

5. PUTTING YOURSELF AT RISK BECAUSE OF DRINKING.

Putting a substance ahead of their own health or safety is one of the most common signs that someone is becoming addicted. There are times when drinking is acceptable and does not put you at risk. However, there are other times when it is a very bad idea. Before work, driving, or after taking medication that shouldn’t be mixed with alcohol are some examples. If you find yourself ignoring warnings and drinking when you shouldn’t, you may be putting yourself and others in danger.

Binge drinking is a growing problem in America. It is defined as consuming five or more drinks within two hours for men, or four or more drinks for women. Approximately one in six adults in America binge drinks more than four times a month. While most people who binge drink do not necessarily have a dependency issue, if you or a loved one drinks to the point of ‘blacking out’ regularly, it may be a sign of growing alcoholism.

7. HAVING TROUBLE IN RELATIONSHIPS.

Addiction and healthy relationships don’t mix. Hiding your substance use from loved ones and prioritizing your addiction over their needs creates a point of stress between you. Long before you experience some of the more obvious signs of addiction, your relationships with family and friends may feel that stress. If your relationships with those around you are under strain, try to look at the role that drinking might have played in causing that strain.

8. FAILING TO QUIT WHEN YOU TRY.

There is a growing trend of people taking a break from drinking for their health. Whether it’s ‘Sober October’ or ‘Dry January’, sober months are all the rage. Other people are just opting to quit drinking during the week. Whichever you opt for, if you try to take a break from drinking or quit altogether and find that you can’t, that may be a sign that you have a more serious problem than you think.

Drinking alone is one of the key early signs of alcoholism. For many people, there is nothing wrong with coming home and enjoying a beer or glass of wine with dinner on their own. However, drinking to get drunk on your own can be a sign of a problem. Enjoying alcohol in moderation while socializing with friends can be unproblematic, but if you regularly drink several drinks alone then your drinking my be turning into AUD.

10. NEGLECTING RESPONSIBILITIES BECAUSE OF DRINKING

Addiction means putting the use of an addictive substance ahead of other things in your life. Often this means choosing between indulging your addiction or meeting your responsibilities. People with a drinking problem will often get drunk before a work engagement or a family responsibility, knowing that they will not be able to do it. If you find yourself prioritizing drinking over work or family responsibilities, then you may well have an issue with alcohol.

Occasionally experiencing one of these signs does not necessarily mean that you have addiction issues with alcohol. However, if you or a loved one are experiencing two or more of these, then it may be time to look into treatment options. There are lots of treatment options available for alcoholics, from 12-step programs to in-patient addiction recovery.

It is important to recognize the early signs of alcoholism and be aware of them.

Confronting addiction can be difficult, especially in yourself. It is important to recognize the early signs of alcoholism and be aware of them. Catching Alcohol Use Disorder before it becomes a serious problem can give you or a loved one a much higher chance of being successful in recovery. If you think you or a loved one may have a problem with alcohol, don’t hesitate to ask for help.