What Is Adderall Paranoia? 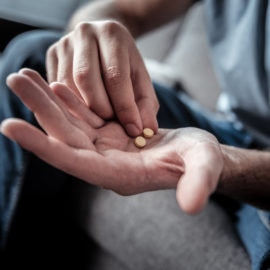 Adderall is a prescription stimulant medication that helps people with ADHD improve their focus, concentration, and reduces hyperactivity symptoms. Adderall works by changing the way certain chemicals in the brain behave. But when Adderall is not used as prescribed or without a doctor’s supervision, it can result in a variety of serious physical and mental problems, including Adderall paranoia.

Because Adderall is well known for its stimulant and euphoric effects, some people seek out the drug to help them stay awake for work or school. Others may seek it out just to experience the high. However, like many stimulant drugs, Adderall carries with it a high risk for abuse and addiction that may require medical detox to safely help them withdraw from the medication.

WHAT IS ADDERALL USED TO TREAT?

Adderall is a prescription medication that combines two stimulants: dextroamphetamine and amphetamine. These stimulants work together to treat attention-deficit/hyperactivity disorder (ADHD) symptoms and a sleep disorder called narcolepsy.

ADHD is a disorder often associated with school-age children; however, adults can also have this disorder. People with ADHD have difficulty focusing on one task at a time, struggle to pay attention, and might have issues with impulse control.

Narcolepsy causes chronic feelings of sleepiness in those with the disorder. People with narcolepsy struggle to stay awake during the daytime and can feel drowsy throughout the day. They might get a sudden “attack” of sleepiness and fall asleep without warning or intention.

HOW DOES ADDERALL WORK TO TREAT THESE DISORDERS?

According to the National Institute on Drug Abuse (NIDA), “Prescription stimulants increase the activity of the brain chemicals dopamine and norepinephrine.” Stimulants like Adderall create a flood of these chemicals in the brain to restore chemical deficiencies in those with ADHD and narcolepsy.

Dopamine is a brain chemical responsible for rewarding certain behaviors. Your brain releases this chemical naturally when you do something that makes you feel good. The brain’s reward system helps to reinforce behaviors that get your needs met.

Norepinephrine affects your circulatory system by opening blood vessels, increasing blood pressure, heart rate, and breathing. As a result, your brain gets more oxygen and blood sugar, which can help those with ADHD focus and helps those with narcolepsy stay awake.

However, an overabundance of these chemicals can lead to hypervigilance and insomnia, which can cause paranoia if Adderall is abused or misused.

While Adderall can effectively treat narcolepsy and ADHD when taken as prescribed, taking too much can create intense feelings of anxiety and fear. When your central nervous system is overly active, your body believes that you are in a “life or death” situation. Your body activates what is known as the “flight or fight” response, which causes you to either run from or fight a potential threat.

When you take stimulants and artificially activate the flight or fight response, your brain believes that a real threat exists, even when there isn’t one. When your body experiences the same reaction as if your life is in danger, your brain starts to believe you are in danger and fills in the gap with stories to justify these feelings.

Since your brain and body’s response to stimulants is real, these stories feel real to you, and you might believe that others are conspiring against you. You might think that loved ones are trying to harm you or that strangers are after you. Since you feel hypervigilant from overusing Adderall, you start to believe that nearly everyone might pose a threat to you.

One of the biggest challenges of treating Adderall paranoia is that you might have trouble trusting those trying to help you. If your loved ones are concerned about your Adderall use, you might believe that they are lying to you or conspiring to get you locked away in a facility. Often, the symptoms of paranoia can be a barrier to treating paranoia itself.

Fortunately, unlike paranoia caused by mental health disorders like schizophrenia, Adderall paranoia can wear off as the stimulants leave your body during detox. If you stop taking Adderall, your paranoia can feel less severe; however, you might experience withdrawal symptoms during detox.

Detoxing is the first step to recovering from Adderall abuse. If you are concerned about Adderall paranoia or notice these symptoms in a loved one, speak to your prescribing physician about these issues. They might recommend going to a medical detox center to treat symptoms of Adderall paranoia and the withdrawal symptoms of detox.

Your primary care physician can also discuss alternative treatments for your ADHD or narcolepsy if you struggle to take Adderall as prescribed due to the addictive nature of the medication.

Abusing prescription stimulants like Adderall can lead to paranoia and other unpleasant side effects. Located near Newport Beach and Long Beach in Southern California, Gratitude Lodge is the perfect place to detox from Adderall and other abused prescription drugs. Start your journey to health and wellness with us.